As many of you know I am a Certified Exercise Physiologist (CEP) and with that come the subscriptions to research journals, and provincial fitness “informer” magazines.  For the most part the articles are great.  Many will delve into a watered down scientific background for the topic at hand and then a practical approach to utilizing it in the field.  However the past publication came in and I was browsing through it.  I will admit, I do not read every article unless the title catches my attention.  One article this past issue was discussing Metabolic Training.  You can guarantee this caught my attention.  The article for the most part was very well done, with a great background on the energy systems, the times that the systems are predominant for and then the characteristics of the muscle fibre types and the energy systems that they are most predominant.

However, at one point the article mentioned the article by Dr. Izumi Tabata called “Effects of moderate-intensity endurance and high-intensity intermittent training on anaerobic capacity and VO₂ max.”

So, during the time of my Masters program I was required to attend a journal club where we would summarize a peer reviewed journal article and then critique it for the entire club.  A great discussion from the group would ensue.  As much as I would hate having to present, I am grateful for the ability now to read an article and make an educated critique of the material.  Many of you may see where this is going.  The article in the provincial magazine stated the proposed findings of the Tabata article which was with this protocol, a increase in VO₂ and an increase in anaerobic capacity.

But with the popularity of this protocol there are two major mistakes when it is utilized.  My goal is to clarify the article so that those of you who read this blog will not fall for the same pitch line of an increased VO₂ with only 8 minutes of work.  Note:  this may be where the gentleman from the fitness show got the idea that to increase VO₂ and train for aerobic events, you only need to do six minutes of work.

The biggest issue is that no one is doing the Tabata protocol.  Despite this systems popularity, the protocol has been bastardized to fit the understanding of those using it.  Although it is often cited, very few people have actually read the entire article, hence why I have a link to it above.  It was rather difficult to find a PDF version but I think if someone is going to use it, they must read and understand the methods and results before they can use and understand the adaptations that occur from its use.

When reading through the methods, it will state that one group performed moderate intensity (70% VO2 Max) steady state cardiovascular exercise for one hour on 5 days per week. This would be Long Slow Distance (LSD) work.  The other group used the Tabata protocol which consisted of a 10 MINUTE STEADY STATE WARM UP followed by 7-8 sets of 20 seconds at 170% VO₂ Max on a mechanically braked cycle ergometer with 10 seconds of rest between each set…. Intensity Work.  The Tabata group performed this exact protocol 4 days of the week.  On the fifth day they performed 30 MINUTES OF STEADY STATE EXERCISE AT 70% VO2 MAX followed by 4 Tabata intervals (20 on 10 off).

So let’s recap… 10 minute steady state warm up x 4 = 40 minutes and add to that 30 minutes of steady state exercise at 70% VO2 max is a total of 70 minutes of LSD work!  And that is combined with the 4 x Tabata Protocol.

Tow glaring errors are present with using the Tabata Protocol in the mode that lets say a fitness class or group would use it.  One, you are not doing the Tabata Protocol.  It is not on a bike, nor would the intensity be in the 170% of VO₂ max required to be a true Tabata.  I would challenge that during a bout of un-weighted squats, for 20 seconds on and 10 seconds off, times 8 rounds, VO₂ would not get above 100%.  If someone has a study that could prove me wrong… please, I would appreciate you forwarding it to me for an evening read.  Two, by using the “Tabata Protocol” for body weight exercises or whatever a fitness class is doing, you may see an increase in anaerobic capacity, but I would suspect that you will not see an increase in VO₂.  Reason I say that is there is no LSD work associated.  Let me explain further.

The following diagram demonstrates the effects of training LSD and Intensity.  The Red blocks are primarily central adaptations (changes to the ability of the body to deliver blood, hence O₂… think heart) while the blue block are primarily peripheral adaptation (changed in the body’s ability to utilize the delivered O₂… think muscles). 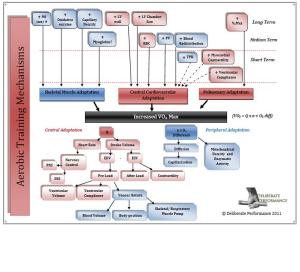 To train only high intensity will develop the body’s ability to utilize O₂ but the engine (heart) will not perform adequate delivery.  Beautiful muscles with a weak heart.  That would be the equivalent of putting a Kia engine in a Ferrari!  Honestly looks good but still a piece of shit.  Now, for those who do only LSD work, they have the engine (heart to deliver) but no ability to adequately utilize the delivered O₂, so we can equate that to having a Ferrari engine in the frame of a Toyota Echo.  That engine would tear that frame a new one, no ability to perform.  That is why you need to train both LSD and high intensity.

And this is why the Tabata Protocol in the paper increased VO₂.  The Tabata group performed 70 minutes a week at LSD and high intensity work.  However there are some other things to consider with the paper.   The students were athletic males but the Tabata group stated with a lower Relative VO₂, therefore if we take into account the ceiling effect of training, with the ET group having a relative VO₂   of 52.9 +/- 4.7 ml·kg·min⁻¹ the amount of improvement could be minimal… if only doing LSD work.

But to look at the figures for VO₂ both groups improved but the Tabata Group (IT) had more room for improvement and they trained both LSD and high intensity.  And yes, anaerobic capacity did not improve in the ET group, but that would be expected with the type of training performed.

Let me make this clear.  I’m not against interval or intensity training.  High-intensity interval training and the Tabata protocol are only one tool in the toolbox.  Claiming that intervals can increase VO₂ and anaerobic capacity, when the protocol is incorrect is false advertising.  8 sets of 20 sec on and 10 sec off may be challenging but the Tabata protocol it is not since body-weight stuff or the other stuff that is often suggested simply cannot achieve the workload of 170% VO₂ max that this study used.  Use the “Tabata Protcols” for what they are… a hell of a workout, but if you are looking to increase VO₂ and anaerobic capacity using the true Tabata Protocol, I suggest getting some bike shams, because you are in for some long hours on the cycle trainer.

Once again, yours in Health and Performance,

4 thoughts on “Tabata bout The VO₂! (Yes a terrible pun)”